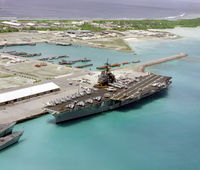 USS Saratoga (CV/CVA/CVB-60), was one of four Forrestal-class supercarriers built for the US Navy in the 1950s. Saratoga was the sixth US Navy ship, and the second aircraft carrier, to be named for the Battle of Saratoga in the American Revolutionary War.

Saratoga was decommissioned in 1994, although she would later be overhauled and returned to service as a training carrier replacing the USS Lexington (CV-16).

In late October of 1995, Saratoga would become home to the newly formed VFH-855 "Wolfpack" of the Canadian Forces Maritime Command, who would spend the next year earning carrier qualifications for their CF-184B Super Tomcats.