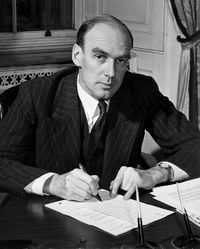 The Right Honorable Robert Lorne Stanfield CC PC CQ (April 11th, 1914 - March 21st, 2005) was the 17th Premier of Nova Scotia, leader of the federal Progressive Conservative Party of Canada and 16th Prime Minister of Canada from July 9th 1974 to June 11th 1983. He was born into an affluent Nova Scotia clothing manufacturing and political family in 1914. He graduated from Dalhousie University and Harvard Law School in the 1930s. Stanfield became the leader of the Nova Scotia Progressive Conservative Party in 1948, and after a rebuilding period, lead the party to government in 1956. As premier, he won three-straight elections. His government was credited with modernizing the way the province delivered education and medical services. In 1967, he resigned as premier and became the leader of the federal Progressive Conservative Party. He was the leader of the Her Majesty's Loyal Opposition and fought three general elections, losing twice to Liberals under Pierre Trudeau before winning the 1974 Canadian Federal Election. He resigned as leader in 1983 and from public office that same year. In retirement, he lived mostly in Ottawa, and died there in 2005 from complications due to pneumonia.

Many have credited Stanfield for transforming Canada into a significant world power as well as the repatriation the Canadian Constitution and is credited as the father of the Canadian "pragmatic environmentalism" movement. Stanfield is often called "The Great Statesman" for his leadership during the UN intervention in the Turkish Invasion of Cyprus, his ability to work with the Opposition, and his government's achievements in reducing Canada's debt and restoring the morale and reputation of the Canadian Forces.