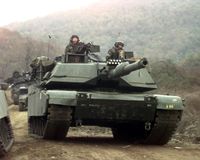 The M1 Abrams is an American third-generation main battle tank. It is named after General Creighton Abrams, former Army chief of staff and commander of United States military forces in the Vietnam War from 1968 to 1972. Highly mobile, designed for modern armored ground warfare, the M1 is well armed and heavily armored. Notable features include the use of a powerful multifuel turbine engine, the adoption of sophisticated composite armor, and separate ammunition storage in a blow-out compartment for crew safety. Weighing nearly 68 short tons (almost 62 metric tons), it is one of the heaviest main battle tanks in service.

The M1 Abrams entered U.S. service in 1980, replacing the M60 tank. It served for over a decade alongside the improved M60A3. The M1 remains the principal main battle tank of the United States Army and Marine Corps, and the armies of Australia, Egypt, Greece, Kuwait, Morocco, Saudi Arabia, and Taiwan.

Three main versions of the M1 Abrams have been deployed, the M1, M1A1, and M1A2, incorporating improved armament, protection, and electronics. These improvements and other upgrades to in-service tanks have allowed this long-serving vehicle to remain in front-line service. In addition, development for the improved M1A3 version has been known since 2009.