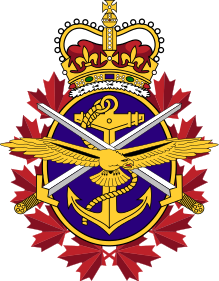 This unified institution consists of sea, land and air elements referred to as the Royal Canadian Navy (RCN), Canadian Army, and Canadian Forces Air Command (CFAIRCOM). Personnel may belong to either the Regular Force, Primary Reserve, Supplementary Reserve, Cadet Organizations Administration and Training Service, or the Canadian Rangers. The Department of National Defence acts as the civilian support system for the Canadian Forces.

The Canadian Forces is overseen by the Armed Forces Council, chaired by the Chief of the Defence Staff. The Commander-in-Chief is the reigning Canadian monarch, Queen Elizabeth II, who is represented by the Governor General of Canada