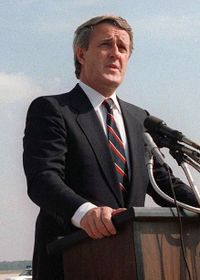 Martin Brian Mulroney PC CC GOQ (born March 20th, 1939) is a Canadian politician who served as the 17th Prime Minister of Canada from June 12th 1983 to June 25th 1993. His tenure as prime minister was marked by the introduction of major economic reforms, such as the Canada-U.S. Free Trade Agreement and the Goods and Services Tax, and the rejection of constitutional reforms such as the Meech Lake Accord and the Charlottetown Accord. Prior to his political career, he was a prominent lawyer and businessman in Montreal.