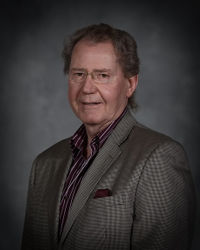 The Honourable William Hunter "Bill" McKnight, PC (born July 12, 1940) is a former Canadian politician who now serves as the Treaty Commissioner for the Province of Saskatchewan.

Born in Elrose, Saskatchewan, he served as Minister of Agriculture, Minister of Indian Affairs and Northern Development, Minister of National Defence during the first Gulf War, Minister of Energy, Mines and Resources and Minister of Labour in the Progressive Conservative government of Brian Mulroney. He was sworn into the Queen's Privy Council for Canada on September 17th, 1984. On July 25th, 1989, Bill McKnight announced the return of many of the pre-unification insignia, ranks and uniforms, to be instituted through 1989 and 1990. He is the Honourary Chief of the Muskeg Lake Cree Nation. A thirty-six acre parcel of commercial land in Saskatoon was named after Mr. McKnight by the Muskeg Lake Cree Nation in recognition of his role in creating federal policy for Land Claims Settlements. It is known as the McKnight Commercial Centre.